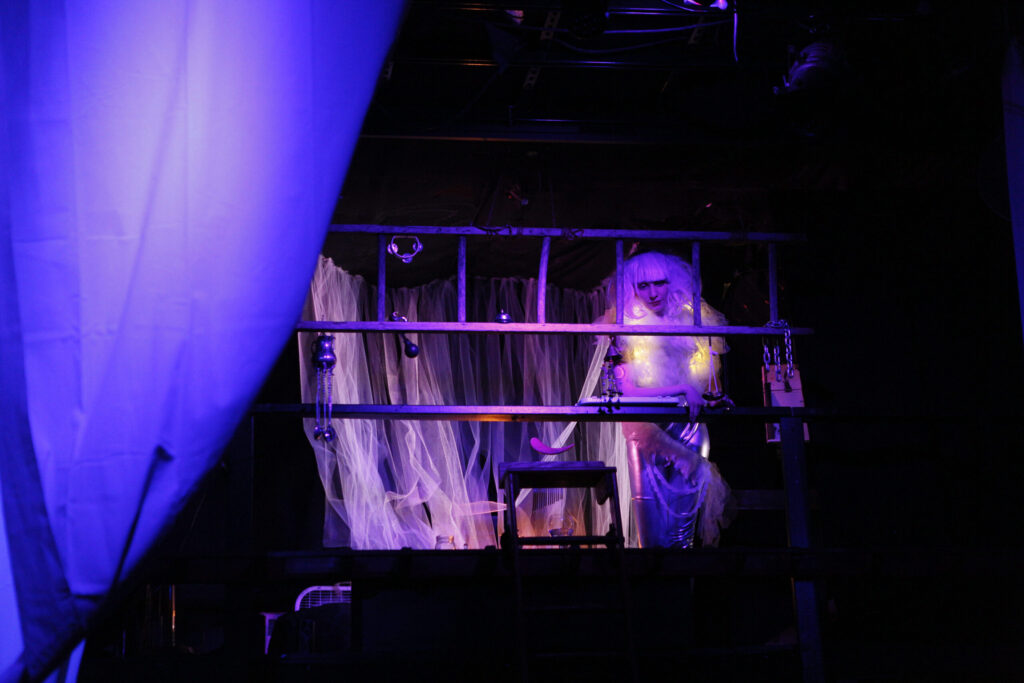 The Prop Thtr, founded in 1981, has a vast archive of productions and photos. On this page, you can find a (small) selection of our primary theater programming from the past several years.

Rhinofest 2020
Prop Thtr has hosted and co-produced, for the last decade, the Rhinoceros Theatre Festival (aka Rhinofest), Chicago’s oldest – and currently only – fringe theatre festival, with Curious Theatre Branch.  2020 marked Rhino’s 31st year anniversary.  2020’s festival, produced in Jan-Feb 2020, just before the Covid-19 live entertainment industry closure in March 2020, presented 48 new plays, out of 100 submissions, in the run of about 6 weeks.  Companies paid nothing to participate, and received 35 percent of their box office gross.  Prop produced four plays in this festival: PANTHER WOMEN: An Army For the Liberation (devised by the Ensemble, co-produced with Perceptions Theatre),  EMERGENCE (Ensemble, co-produced with Cleveland Public Theatre), BECKETT: A Show About Nothingness (Paul Brennan), and @MIDNIGHT (Ensemble, co-produced with Whisper Theatre Collective). 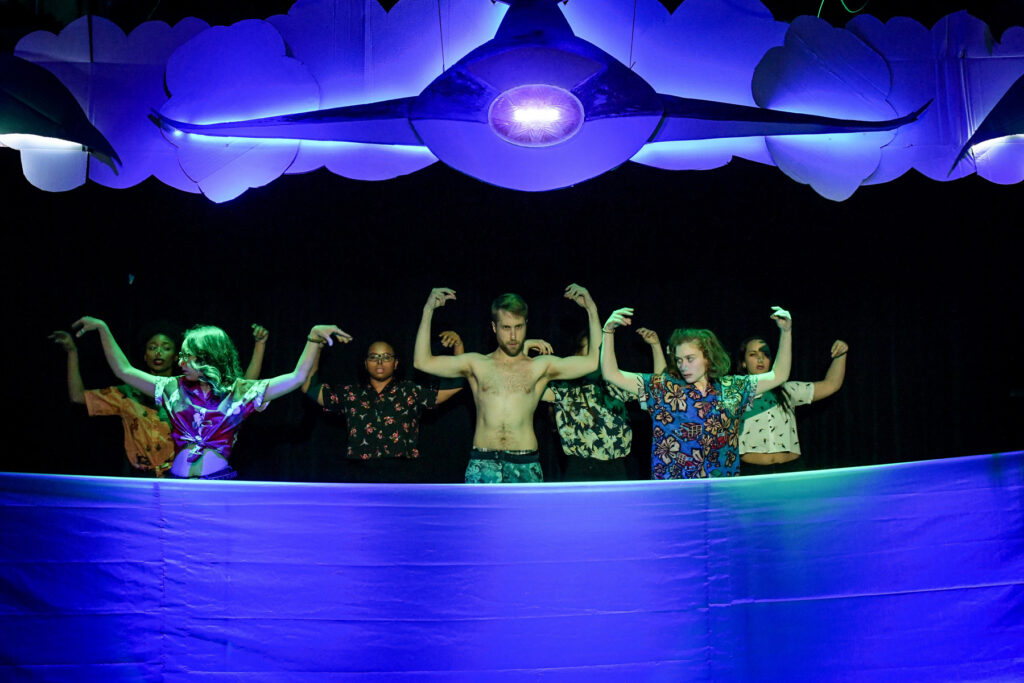 2 Unfortunate 2 Travel – 2019
It’s a tough time right now. You deserve a vacation. Jack Wilton, self-appointed ally and recently returned vacationer, wants to give you one. He has transformed his recent escapade into a variety show depicting his adventures in a range of spectacular and crowd-pleasing styles, with everything from shadow puppetry to a live game show. He’s created a safe space where you can sit back, drink a free beer and enjoy an hour free from any political discussion. Over the course of the evening, the cracks begin to show in Jack’s stories, his conduct and the fabric of reality itself as the performing ensemble of five women work to bring Jack’s stories to life and struggle within both a play and a society that profits off of their silence.

Museum of Contemporary Art / Prop Thtr “The Storefront Project” – 2019
From the MCA’s writeup of this project, by Ira Murfin, edited – needs further editing!

The two institutions instigating The Storefront Project – Prop Thtr and MCA Chicago – would seem to sit at opposite poles in Chicago’s performance ecology. The Prop is a longstanding staple of Chicago’s fringe, hopping from storefront to storefront while maintaining a rather protean artistic profile over the course of nearly forty years. In its time, The Prop has produced everything from world premier English translations of Brecht to a blockbuster nostalgia-tinged one-person show about Chicago’s former Mayor Richard J. Daley. For the last 15 years it has occupied a more permanent home in a linked pair of former storefronts on a relatively unassuming stretch of Elston Avenue in the only-recently gentrifying Avondale neighborhood. With two black boxes plus gallery and rehearsal space across the two buildings, Prop has also often been able to offer shelter to other companies and artists as renters or presenting partners, including hosting and co-producing for the last decade or so the Rhinoceros Theatre Festival, Chicago’s oldest (and currently only) fringe theatre festival, organized by Prop’s frequent partner company, Curious Theatre Branch.

The MCA Stage, meanwhile, has over the last 25 years or so become Chicago’s primary stop on the global contemporary performance touring circuit that the New York avant-garde gave birth to and relies on, making it the main point of contact between Chicago audiences and the performances that are setting critical and creative agendas nationally and internationally. The MCA does maintain a commitment to regularly presenting work being made in Chicago by Chicago artists and ensembles (including at least one prior intersection with the Prop as part of a 2006 commemoration of Samuel Beckett’s centennial, organized with Curious Theatre Branch, which featured “a multiplicity of kinetic site-specific performances in the hidden corners  of the MCA, including the galleries, stairwells, and even the freight elevator,” a description that might have a familiar ring to it.) Nonetheless, it would be unusual to think of the MCA and The Prop – or most Chicago storefronts, whatever their aesthetic profile – together. That is not necessarily a bad thing; institutions can be complementary without necessarily being similar.

The Prop would be a good place to encounter a particularly eclectic array of performance work, all deeply embedded in Chicago’s creative community, while the MCA provides a key portal to the kind of high-level, interdisciplinary, experimental performance being seen, discussed, and funded in the wider self-identified performance world.

With The Storefront Project, though, Olivia Lilley and Tara Aisha Willis have made the simple yet surprisingly audacious move to see past the established habits and assumptions of history, and to jointly create a platform for performance that circumvents default associations with their home institutions, instead highlighting the broad spectrum of aesthetic and procedural approaches that can be found in Chicago’s performance communities. Both are young independent artists occupying relatively new leadership roles at the Prop and MCA Stage, respectively, very different institutions each with a long history and entrenched narrative about its place in Chicago’s arts ecosystem. Together, Lilley and Willis are using the respective resources of their institutions to present new work in ways that center difference – individual, institutional, architectural, geographical, aesthetic – and to emphasize collective processes of theatrical creation. The history of Chicago theatre and performance they are summoning is one that we are only now beginning to be able to remember, one that looks and feels much more like the city in which we live. The artists they have invited to helm the six new devised works that comprise The Storefront Project include individuals with very different creative and personal profiles, cutting across age, identity, and artistic background, who nonetheless each represent an authentic example of a Chicago theatre and performance artist. Lilley and Willis have given them each a structure and a set of constraints that seem designed to emphasize some of the most familiar and celebrated aspects of Chicago theatre, but that push those signature elements toward more fully realized applications of ensemble creation, intimate spatial relationships that integrate physical and social environments, and inventive adaptations in response to repurposed performance spaces and contexts. These six newly commissioned works not only had to be designed for nontraditional performance spaces outside the two theaters’ formal stages, but also crucially to move between the very different institutional contexts of the Prop and the MCA.

While that pairing in particular may not describe a common circuit, it does approximate the opportunities presented and the adaptations required in the professional lives of these artists, each of whom moves between the theatrical mainstream and the fringe, allocating their time and resources between big cultural or educational institutions and itinerant independent ensembles. These artists make work in storefronts, of course, but also in state of the art theaters, and in nightclubs, park district buildings, and church basements, building on the nimble and resourceful tradition of Chicago theatre, while always striving to make something entirely new.

Under the guidance of the lead artist, each of these works has been made collectively, not from a script by a single author, but by excavating historical materials and identifying source texts in the public domain through shared devising processes. Those source materials include turn of last century advertisements, obituaries and Instagram accounts, literary fiction, biography, popular song, and personal diaries. Though the role of the author is reimagined, the primacy of
language remains. Subject matter includes anti-lynching campaigns, historical trans experience, mental health and creativity, and Karl Lagerfeld’s cat, representing perspectives on race, gender, sexuality, disability, and popular culture that may be deeply personal, but are also always publicly oriented, shared, and collectively held. The results promise original works that make theatre out of non-dramatic texts in non-traditional performance spaces, while also explicitly building on the long history of theatre in Chicago, and the institutional structures co-created by Chicago artists across time. At the same time, they offer a glimpse into the material realities of the lives of working theatre artists in Chicago now, as they negotiate increased economic precarity, shifting institutional and geographic configurations, relationships with presenting partners, the transitory community of collaborative ensembles, and the complex inheritances of Chicago’s performance history.

Neverland – 2018
“Neverland” chronicles the final days of Peter Pan’s utopia. When Wendy, an Avondale teenager, becomes the newest addition to The Lost, Peter’s band of runaway teens from different decades, she discovers an underground kingdom ready to shatter. Struggling to find its future under the direction of confused leadership, bloody past practices, and centuries long wars over legacy, the inhabitants of Neverland can no longer hide from what they’ve become. The journey from childhood to adulthood has never been more treacherous than in this “Peter Pan” in the era of Trump’s America.

2017 The Last Days of the Commune (Bertolt Brecht)